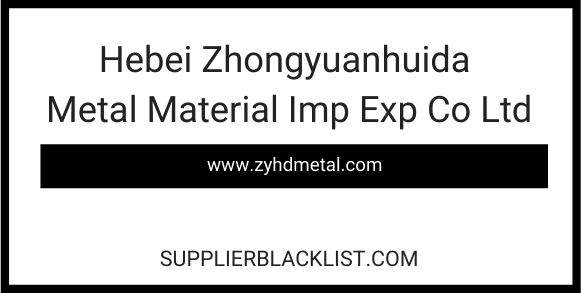 Are you looking for information on the company Hebei Zhongyuanhuida Metal Material Imp Exp Co Ltd located in China who sells Aluminum Plate? If so, read below to read one buyer’s experience with this company.

Also you will find related search links to explore more about Hebei Zhongyuanhuida Metal Material Imp Exp Co Ltd on Supplier Blacklist and across the web.

User Experience:
• On October 2020, our company had initially agreed with the Chinese supplier Hebei Zhongyuanhuida Metal Material Imp&Exp Co., Ltd (河北中远汇达金属材料进出口贸易有限公司) from Handan City, Hebei Province, China on the purchase of 40 TONNES of ALUMINIUM PLATES 5083F 100mm THICKNESS, 500mm WIDTH 6000mm LENGTH NCM: 76061290. During this negotiation period we were communicating via e-mail with an employee from the supplier nominated “Tracy” (tracy@zyhdmetal.com). We confirmed the price as including insurance, customs and freight, and the supplier sent us a Proforma Invoice on 2020.10.15 detailing the product quantity and other specifications.

User Recommendations:
• We would strongly advise not to purchase any kind of metal or aluminum product from suppliers located Handan City or Hebei Province itself. Do as much due diligence as possible, in this kind of situation and the current covid climate, less is definitely not more. Over doing due diligence might even be necessary, as we have also read of reports where buyers even came to china and witnessed the products being loaded, but failed to receive them in their respective countries.
• We suggest they reveal who their directors and shareholders are (via official reports they can send from company register searches), and at least this builds an additional layer of accountability amongst other types of measures too. Of course, this itself wont guarantee anything, but it could play a part in filtering out some of the more notorious players in this market.
• This operation generated large expenses for our company, not only on the amount we paid concerning the failed import itself but other cargo and demurrage fees we had to pay for Brazilian port authorities for a product we did not want it. These companies and people are deceptive, sophisticated in their scamming actions. They make you think they are by your side, they will make you put your guard down by offering a refund and other kinds of sweet talking throughout the process after you realized they send the wrong products and quantity.
• Further, check all the basics, you must somehow be able to determine it is the actual company you’re dealing with (not a middle man cos they are great as passing off as the actual manufacture with their half glossy websites. Do check company registers, shareholders, SGS reports.
• In our case they said they had so many years of experience yet their company was only registered in 2019.
• Get your own truck loaded and have an agent inspect at the port,
• have your own insurance, confirm the identity of the legal representatives, staff and so on before proceeding. They should have something to lose and not even become opportunistic once they know money has been transferred to them.
• Perhaps have them notarize copies of their ID cards and company documents (yes, it is a hurdle, but if your consignment is that valuable, and they are an honest company, they might comply). By notarization of certain documents, it at least creates another layer of legal responsibility and creates separate liability of fraud separate from your transaction.
• It is also necessary to be affirmed that the legal representatives and directors listed are not merely paid to be listed, rather than the actual owners. Sometimes identity thieves might register fraudulent directors, and when liability arises, the company itself fears nothing, and the person being held accountable may not even know they are under liability or being sued/ in a dispute.
• Finally, if you or anyone had a similar experience with a company from Handan, feel free to contact us by leaving your email address on the comments or sending us a message.

You can also learn more about loss prevention here.

If you need more information, you can click the below links to search for more submissions about Hebei Zhongyuanhuida Metal Material Imp Exp Co Ltd on Supplier Blacklist as well as go to the search results page on Google for more reviews online about this company.

Perform a Supplier Blacklist search for more reviews on this company.