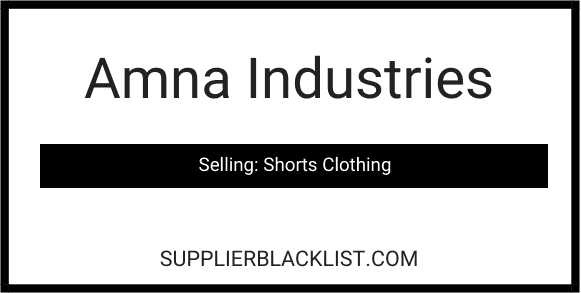 Have you been doing research on Amna Industries located in Pakistan sells Shorts Clothing? If so, read on below to read one buyers experience when trying to buy Shorts Clothing.

At the bottom of this page you will find helpful links to find out more information about this company here on SupplierBlacklist.com as well as across the web using Google.

Value of the Purchase Order when the incident occurred:
Under 1,000 USD

Stage of relationship with the supplier at the time of the incident:
Order #2

User Experience:
I originally ordered a sample from this manufacturer and it was agreed that I would send over the changes that I wanted to make from that sample. After making the changes I ordered a bulk order of 20 (10 with red and white print and 10 with yellow and black print) shorts in which the new changes were supposed to reflect from the sample. I was told very inaccurate time and that my order would only take until May 25th in which I placed the order on May 7th. I was told by the manufacturer that I would be updated every step of the way throughout my order. I was also asked to send over the details on the order one more time just for production clarification. I asked the manufacturer to send me pictures of the first item made in the order before completing the entire order so that I can give the ok to continue with the rest of the shorts. As the process continued, I pretty much had to continue to reach out because they were not giving any updates as we originally agreed on. I was told that the order would take another 3-4 days to complete however, I explained to the manufacturer to please not complete the entire order until I seen and reviewed the first item from the order. After sending me pictures of the cutting of the shorts before they got sewed together, I realized that all 20 pairs were cut (without sending me the finishing product of the first pair) and the logo print on the red shorts was not the correct color. The manufacturer made all 20 shorts yellow and black logo print which is not what I asked for. As time went on, I asked the manufacturer to change this and I was told it was too late to change the color since they were printed already.

I expressed to the manufacturer that this is why I specifically asked for the updates as well as for one to be done completely before all the rest where done. I was told that the color would be changed after complaining about this and I also made sure to confirm the sizing that I asked for which was 1 (XS) 2(S, M, L, XL) 1(XXL) of each color. I asked for another update before the order got sent out so I can confirm the color change with the logo and any other discrepancies that may have needed to be taken care of before getting sent out. I did not get any pictures before the order was sent. I just got a message from the manufacturer stating that the order was shipped and that the tracking number. I didn’t receive my order until June 7th and I was very unhappy with that I received. I did not receive the sizing that I asked for (literally got size quantities per color I did not ask for like 3 mediums, 2 extra larges). They also did a horrible job with stitching as well as the coverup they attempted to do on the logo color change. After voicing my problems to the manufacturer they acted as if they did not care and they told me they could remake the order for another $200 plus me shipping the order back to them in which I originally paid $300 for the entire order plus shipping, to begin with. I refuse to pay more money for something that wasn’t done correctly on their part after an agreement was made as various details were given. (tried to include pictures but the file was too big)

User Recommendations:
I’ve learned to get resources from those that have used the manufacturer previously instead of going based on their pictures on their page. For other companies, I would advise you to communicate effectively with those who are giving you money.

If you need more information, you can click the below links to search for more submissions about Amna Industries on Supplier Blacklist as well as go to the search results page on Google for more reviews online about this company.