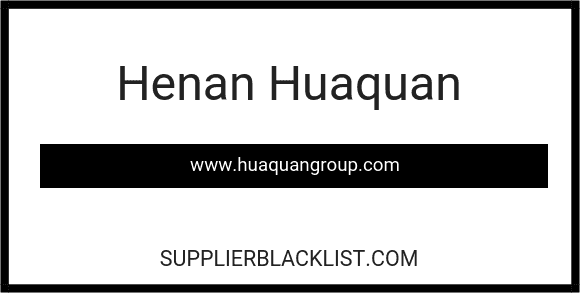 Are you researching possibly doing business with Henan Huaquan from China who sells Poly Aluminium Chloride? If so, you may want to read the below review of the experience of one buyer and their recommendation to consider when dealing with this company.

You can also find more searching options to learn more about Henan Huaquan on Supplier Blacklist and across the web.

User Experience:
On 13/2/2019, one Mr. Gary Wei (+86 151 3846 9487) contacted me, claiming he was from Henan Huaquan and had received my inquiries regarding prices on Poly Aluminum Chloride (PAC). They offered us an acceptable price for their product and agreed to send us a sample, which was of acceptable quality, but there was a slight problem of it being too brown (which will become important later on), and too coarse. So I asked him if it was possible to make the powder finer, the color more yellow (which I admit, is partly our fault for not foreseeing this) while maintaining the price – he agreed. It is from here that things went wrong. Firstly, when he made the contract, he put my name (an employee) as buyer (instead of the company’s name), which gave us a hint on their company’s unprofessional ethics. After this, he continually screwed up on the contract with stupid mistakes, having to remake the contract several times. On the contract, we agreed to buy a full container (23MT) with pellets at added costs and payment term of 50% TT in advance promising that they had a lot of experience exporting and that everything was to be ok. We also inquire them to make a FORM E for tax purposes at additional costs, which both side agreed. On Sunday 12/5/2019, Mr. Gary bombarded me with calls telling me that the goods were at their port but their forwarder told them it could only load 18MT WITH PALLETS, asking me if they could load it WITHOUT PELLETS so they could load more goods, to which I could not answer immediately as it was not a working day. A few hours later, I told him that we specifically told them to load WITH PELLETS as we would not be able to take the cargo out WITHOUT PELLETS, to which he blamed us that they will lose money if they loaded it WITH PELLETS even though it was them who could not deal with their own forwarder.

After blaming me for it, he then told me it could only load 16MT WITHOUT PELLETS in the container and 2MT will be sent by FCL and told us if we do not accept it, they would default our order and keep our deposit, forcing us to take the cost even though it was their fault in the first place. We told them we would take the 16MT, but ABSOLUTELY DO NOT send the 2MT by FCL because that would raise the costs tremendously because of the shipping fees, but they DID IT ANYWAY. We were absolutely outraged by their behavior as they did not consult us, did everything very poorly, while pushing all the costs onto us. We bargained with them and told them even though it was absolutely their fault, for the sake of cooperation, let both side share the costs together, to which they claimed to agree and promised they will transfer 50% of the additional costs later. We were hoping that the worst was over, but the shipment arrived, and more trouble came with it.

The product, as ‘promised’, was finer, more yellow, and the tested quality appeared to be the same. However, appeared as though the color yellow was added into the original product to make it appear more yellow (not because of the improved quality like the usual cases), and after usage would leave a very yellow, murky water completely defeating the purpose of PAC (which is to treat water) making the container unusable. The FORM E which we paid them to make used the wrong code which only applied to China while our country required a different code (we asked a different Chinese supplier and that was what they told us), which they should have known since they claimed to be exporting experts, making the FORM E unusable as well. When we contact them asking about the situation, they completely ignored our messages, and as a cherry on top, no ‘shared costs’ amount were transferred to us.

User Recommendations:
I have purchased chemicals twice from this same province. My associates in China told me that the suppliers in this area may not be the best to deal with. They might be right, so be careful.

If you need more information, you can click the below links to search for more submissions about Henan Huaquan on Supplier Blacklist as well as go to the search results page on Google for more reviews online about this company.