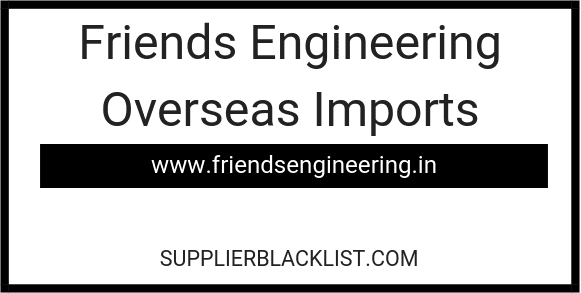 Are you researching possibly doing business with Friends Engineering Overseas Imports from India who sells Paper Bag Making Machine? If so, you may want to read the below review of the experience of one buyer and their recommendation to consider when dealing with this company.

You can also find more searching options to learn more about Friends Engineering Overseas Imports on Supplier Blacklist and across the web.

User Experience:
In March of 2012 my company purchased a paper bag making machine for 15500 USD from Friends Engineering Overseas Imports, a company based out of New Delhi, India, which describes themselves as “Exporters of Paper Printing, Binding and Box Making Machinery”. Prior to our sending complete payment, they sent us a video of the functioning machine that would be put mostly in its entirety into a crate and require minimal work to set up once unboxed.

Almost nine months later, we finally received the machine in December 2012. Our team, which included two engineers and a tradesman/handyman opened the crate, and attached the external parts supplied to make it operational as per the instructions supplied. The machine would not work and they told us they suspected some parts were missing.

We contacted Friends Engineering Overseas Imports and they assured us that this was not the case. They said the problem was easily fixable and they would provide us with the support and expertise needed. We believed them. At their request, we sent numerous specific pictures and videos to them to help diagnose the problem. They would thank us, say this was helpful, ask for some time to diagnose, promise a solution and then seem to forget about us. When we asked them what the delay was they would again promise assistance, apologize for the delay and pass our communications off to different staff members. Sometimes additional photos or videos were requested or sent, usually a duplicate of what they had already had from us. However, no real help was ever actually provided though we got many reassurances that they were working on the problem. Throughout the ordeal we offered to send back the machine so that they could fix it at their factory. Once it worked, we would take it back and pay all expenses involved. They refused to receive the machine. This went on for well over two years, over which period of time we set up two paper bag making operations in China.

In 2015 we finally moved the machine to the larger of our warehouses/operations in China, as we were running similar machines at our facility there, and hoped they could fix and get the machine working. The Chinese workers were also unable to make the machine operational even with their extensive prior experience running/fixing and operating similar machines, and questioned whether the machine in the original video and the one that we owned were the same. It appeared there were parts missing. The other machines in the warehouse were Chinese manufactured and all worked correctly. However, no matter what we tried, we could not get the Friends Engineering machine to function how it was meant to even though the design was very similar to the other paper bag making machines we now owned and operated.

After discussing with Manjit at Friends Engineering Overseas Imports, he said missing parts were indeed the problem and said he would send us the missing and some replacement parts at an additional cost of 500USD in August 2016. We sent the funds, but we never received any parts. We do not know if they were even made although we were repeatedly told they were on their way to us. He just kept our 500USD and started to ignore our messages, e-mails and phone calls.

In January 2019 we sent someone to talk to them in person. Our representative was at first ignored once he arrived. A meeting was then arranged at the factory, but once at the factory he was told to come meet them at the office. When he went to the office they weren’t there. He was able to meet them with them on an entirely different day.

At this meeting, they said they could fly out to see the machine in about two months (at our expense of course), presumably as a way to stall the person we sent. They requested to see a video. They already have at least fifty videos. He requested the parts they said were required to make the machine run. They were unable to provide them. He requested the 500USD back for said parts and they refused. He said they could just have the machine back, and they did not want it – they KNOW they sent us a useless, worthless piece of junk that DOES NOT WORK.

Plus over 500 man hours wasted.

User Recommendations:
Do not conduct business with Friends Engineering Overseas Imports. We trusted that we would eventually at least receive help or a solution to the problem with the machine that they manufactured, but giving them numerous chances only resulted in too much time passing and money, time, resources, labour and space being wasted. This company gives India a bad name and has certainly made me wary of conducting business within that country.

If you need more information, you can click the below links to search for more submissions about Friends Engineering Overseas Imports on Supplier Blacklist as well as go to the search results page on Google for more reviews online about this company.