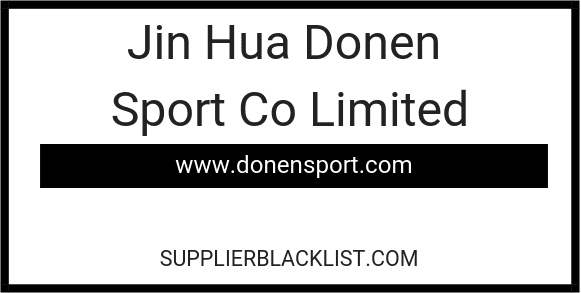 You will also find at the bottom of this page, helpful links to find more information about this company here on SupplierBlacklist.com as well as across the web using Google.

Stage of relationship with the supplier at the time of the incident:
Order #3-5

User Experience:
Our group had purchased stocks from Donen over the last 3 years, and although some deliveries were very late, overall the service was sufficient. We had one poor experience with quality, and the factory refunded us the amount paid, so we felt confident they were a trustworthy supplier.

Two senior members of the company visited China at the start of the relationship and inspected the factory premises. We also met with Helen, the factory owner, at various trade shows over the years.

On this occasion, we had two large batches of orders in progress. Things started to go wrong where shipping dates were missed; when our finance team asked for an explanation for the missed shipment dates they were told this was the fault of our QC team for amending a design at the last minute. Conversely, the QC team were told shipment dates were being missed due to late payments – this was incorrect & all orders had a full 30% upfront advance payment made against them.

When the first batch of stocks were air freighted, we were given false dates for the shipment. We ended up discussing with DHL directly who advised that the stocks had not been sent until 2 weeks after we had been told, and that incorrect paperwork had been supplied. DHL had been trying to obtain correct documents from the factory who told them they were ‘too busy’ to cooperate. Eventually we produced the authorization documents ourselves in order for customs to release our goods – our air freight arrived 6 weeks after we were told it had been sent.

Following on from this, the next batch of stock was ready from an order that was already several weeks late, and we were informed at the last minute that the completed production was only a proportion of the goods. We asked for this to be air freighted immediately, and were told we would have to pay for 100% cost of the goods upfront, not on proof of shipping as agreed, would be expected to cover the air freight costs ourselves, and none of the 30% deposit we had already paid would be deducted. At the time we had little option but to accept as our customer was very angry at the delayed order & was becoming desperate for their stocks.

This order we paid upfront, and the stock arrived.

We were then informed, 3 weeks or so later, that the next batch of stocks were complete, and again if we paid upfront for the air freight these would dispatch immediately. We have this confirmation in writing. We paid via bank transfer on 26th July 2018, and no stock was shipped. We chased this exhaustively, and were told that our stocks, paid for 100% up front, would not be shipped until we paid $60k for other stocks, which had not dispatched, were at this point 4-5 months late, and which we had no proof had been produced.

On asking for evidence that the stocks had been produced, we repeatedly received only images of stacked boxes, which were far too few boxes to contain the quantities we had ordered in any case.

In the end we refused to send further funds to this factory until the stocks we had already paid for were dispatched. We appointed a lawyer to provide us with assistance, who confirmed it would be very unwise to continue sending payments to a factory with a poor track record & who had already reneged on a written agreement to dispatch our stocks immediately on receipt of payment.

This reached a stalemate, with the factory refusing to dispatch anything at all, and us being unwilling to make any further remittances.

In the end we were forced to write off our stocks, and move our production supply to another factory.

User Recommendations:
We learned never to comply with any demand to amend payment terms – this is the first sign of a breach of contract & in the future we will not proceed with any payments outside of those set out in the formal Purchase Order agreement.

If you need more information, you can click the below links to search for more submissions about Jin Hua Donen Sport Co Limited on Supplier Blacklist as well as go to the search results page on Google for more reviews online about this company.