Posted on September 6, 2017 by SBL in Blacklisted Suppliers - No Comments 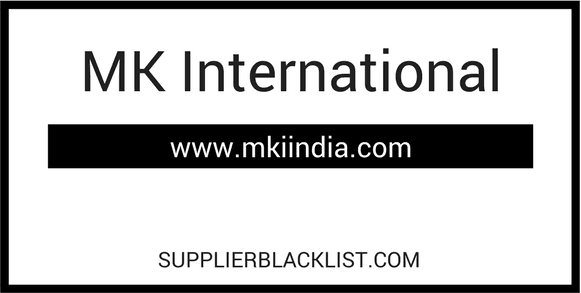 Value of the Purchase Order when the incident occurred:
Under 1,000 USD

User Experience:
I contacted Mohammad Azeem from MK International to discuss an order of tingsha cymbals. I was sent a catalogue, and chose two specific models which had their own unique serial numbers. The choices were made based on the size (7cm) and design of the cymbals.

I paid over $600 USD for 100 sets of cymbals, 50 of each model. Two months later, as agreed, I received a package from MK International – but it did not contain my products. The tingsha cymbals inside were cheap looking, the wrong designs, and the wrong sizes. The size was an issue as I had already ordered and received pouches of a particular size for the cymbals.

One set of cymbals was 1cm smaller in diameter than agreed and made of cheap looking tinny metal, and the other had a tacky “dragon” relief emblazoned on the front. They were tingsha cymbals, but beyond that there was no resemblance whatsoever to the products that I ordered. Furthermore, I checked the advertising material thinking that it must have been a mistake – but these cymbals were not even available in the catalog!

Dealing with Mohammad Azeem was very frustrating, and it became clear to me early on that there would be no solution for me. When I first opened the package, I messaged him with pictures of the cymbals I had received, demonstrating that neither one was the correct colour or design, and that one was even the wrong size. He replied at once, saying he would look into the problem and respond in a few days. A week passed, and I messaged again. He said that he was now away on holidays and would not be able to respond for another week. Several weeks passed, and I messaged again. Each time I contacted this man, it was the same – he promised to respond in a few days, and ignored me. I believe he was hoping that I would simply give up and stop bothering him.

Several times I asked him the same two questions; What happened to my order, and does MK International make the cymbals I ordered?

This went on for four months before I cut contact with Mohammad Azeem of MK International. In the course of trying to sell me more cymbals, he admitted in Whatsapp messages that the company does not in fact manufacture the specific models that I ordered, but he refused to tell me what happened to my order or where he produced the cymbals that he sent me and why they were not in the catalog. I suspect that he purchased very cheap cymbals from a local manufacturer and simply resold them to me at an enormous mark-up.

MK International is a scam, and Mohammad Azeem admitted to me that he took my money despite the fact that I was never going to receive the products I ordered. As far as I am concerned, the man is a thief, and I am writing this article to help warn people away from dealing with him and this “manufacturing company”.

User Recommendations:
The level of informality and trust with which I entered this agreement were my downfall. I trusted Mohammad Azeem, thinking that he was running a legitimate business based off of the professional advertising material he had displaying high quality products. Obviously, this material belongs to a different company or is a false compilation of the material of multiple companies – I should have conducted more due diligence before dealing with MK International! It was a scam, and I fell for it, and now I am stuck with cheap, low quality products that I am unwilling to subject my customers to for their own sake as well as to avoid damaging the reputation of my business.