Posted on June 29, 2017 by SBL in Blacklisted Suppliers - No Comments 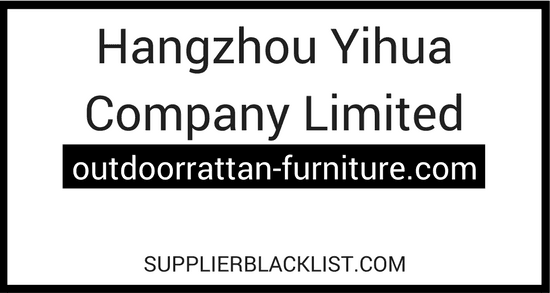 User Experience:
2015
We contacted Evensun Rattan through Alibaba and ” Ivy Shar” told us that “Daniel” would help us. The contracts were tight, the factory was supposed to have signed it and there was a stamp.

1.A Purchased 200,000 worth of rattan wicker patio furniture in 2015, the contract stated the fabric was to be acrylic. Unfortunately, they switched our fabric to some cheap factory stock and it faded. We did not know this right away.
1.B. The furniture was supposed to ship in June, but was not shipped until August, well the first shipments, the last shipments were received in October/November instead of June/July so we lost a season of sales. The contract stated we were owed 1% per day late fee, but we never received a single cent.
1.C. Many of the items were made extremely incorrectly.
1.D. The contract said Viro brand wicker, but in fact, to save money, they wove cheap rattan underneath the Viro and we could not sell it.
1. E They used the wrong feet.
1. F, There were quality issues including webbing, staples etc.

Because we received our furniture so late in the season, We didn’t discover the fading fabric until late 2015 and early 2016. “Daniel assured us that he would replace it.” In fact, as you will see, it was never replaced. Instead, we were defrauded.

Before we knew the full impact of the fading, we placed another order. Because Evensun Rattan aka Hangzhou Yihua Company Limited knew the first fabric was bad, they changed it again without our permission and this fabric, that now did not match the first fabric faded within weeks.

In addition, we paid about 18,000 to have oxford inner covers on our cushions and instead, they sent the cushions wrapped in plastic bag like material which trapped in water, so there is another blatant theft.

Per our contract these items should have been replaced within 10 days, but they were never replaced. See below for the worst of the issue:

Hangzhou Yihua Company Limited told us that if we placed an order they would ship us a replacement for *just* the 2016 covers. We did not agree or think it was fair but they stated that was ALL they would do. So we placed an order in February of 2017, paid our deposit and they were supposed to ship in in March. When the shipping date came around, they told us that they were not done, in fact they had not even started because they
did not yet have the fabric made. Then they demanded that we send them *another* 10,000 or they would not make the fabric. We sent the money because we owed our clients covers and did not know what else to do.

We volunteered to buy all white covers from the factory stock material to send to our clients so they’d at least have something while the furniture covers were being made. We were told they would ship mid April, but they did not get sent until late May.

The container of fabric covers was not ready until June 10th, and when we received the container TODAY It was NEARLY EMPTY. It was ALL A SHAM.

They have robbed us, committed fraud, and breached every contract in every possible way. They belong in jail. THIS HAS BEEN CRIMINAL FRAUD AND WE WILL SEEK TO PUNISH THEM TO THE GREATEST EXTENT OF THE LAW.